So here is more about Hulgreen, founded in October 2011. Hulgreen Productions is the creative force behind the award winning Bang and Bump Show. After an inspirational trip to New York City; Dave Hulteen, Jr. and Jerome Green set about to create their own puppet show.

Finding two store bought and generic monster puppets, Dave and Jerome created a simple buddy style duet video naming the puppets “Bang” and “Bump”. They were named after the respective sounds monsters make in the night. The video caused enough attention for the two to make a regular series. “The Bang and Bump Show” grew in popularity quickly. Dave and Jerome combined their last names to make “Hulgreen Productions.” 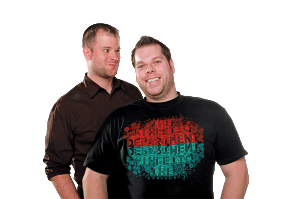 This commitment to good old fashioned humor with a fresh new look, and without sacrificing content, the show quickly amassed a significant audience on YouTube, Facebook, and Twitter. They have been interviewed by the Australian magazine Kid Zone. Bang and Bump have filmed commercial spots that were shown at the Jingle Ball in Madison Square Garden. They have also been heard on New York’s number one hit music station Z100. They have performed internationally at large convention centers, welcomed crowds on the jumbo-tron in Yankee Stadium, and won three Videographer Awards for Best On Screen Talent and Best Web Series.

Hulgreen eventually began collaborating with other organizations to create art, design, animation, special effects, and video services. We aim to deliver a high standard in both in production value and family friendly entertainment.

They have worked with The Salvation Army, the American Broadcasting Company, Clear Channel Communications, and SModcast Internet Radio. Hulgreen Productions offer a variety of professional creative services services and are available to help you with all your project needs.